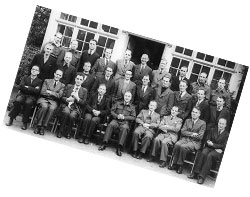 Operation Paperclip was the codename under which the US intelligence and military services extricated scientists from Germany, during and after the final stages of World War II. The project was originally called Operation Overcast, and is sometimes also known as Project Paperclip.

Of particular interest were scientists specialising in aerodynamics and rocketry (such as those involved in the V-1 and V-2 projects), chemical weapons, chemical reaction technology and medicine. These scientists and their families were secretly brought to the United States, without State Department review and approval; their service for Hitler's Third Reich, NSDAP and SS memberships as well as the classification of many as war criminals or security threats also disqualified them from officially obtaining visas. An aim of the operation was capturing equipment before the Soviets came in. The US Army destroyed some of the German equipment to prevent it from being captured by the advancing Soviet Army.

The majority of the scientists, numbering almost 500, were deployed at White Sands Proving Ground, New Mexico, Fort Bliss, Texas and Huntsville, Alabama to work on guided missile and ballistic missile technology. This in turn led to the foundation of NASA and the US ICBM program.

Much of the information surrounding Operation Paperclip is still classified.